The 2023 Healeysport Speed Championship Sprint and Hill Climb regulations and entry form are available now by clicking on the Regulations tab above.  If you are thinking of taking part or if you have any questions, please contact Paul Baker our Championship Organiser on competitionsec@austinhealeyclub.com

The 2023 challenge will be a 14 round championship with two Healey classes sponsored by Bill Rawles Classic Cars (BRCC) and a Sprite, plus our new Libre classes sponsored by Peter May Engineering Ltd. In addition to the class awards, Cape International sponsor the award for the overall Sprint and Hill Climb champion.

Our 2023 events calendar is available now by clicking on the Events Calendar tab above.

Steve Casson (pictured right) was our 2022 Overall Champion in his much modified Sebring Sprite.  We are looking forward to seeing him in his new Lenham bodied Sprite in 2023.

Following our practice day at Curborough on 30 March, the 2023 series will include double header events (two rounds) of hill climbing at Shelsley Walsh, Harewood, Loton Park and Gurston Down, with a single round at Prescott.  In addition, there will be a two day sprint at Anglesey with single day sprints at Lydden Hill, Goodwood and Curborough.

Each venue provides a different set of challenges to test the Healey driver's skill and abilities to the full. This series is open to any Healey or MG Midget driver with some or no motor sport experience and a car that can be road standard, modified or part of our new Libre class; over half the races will have target times set for each driver, to take into account the different abilities of the driver and their cars, so everyone has an opportunity to win a race. Although highly competitive, there is also a strong sense of camaraderie amongst the thirty or so drivers who regularly compete and the social aspect of this sport is very important to everyone. 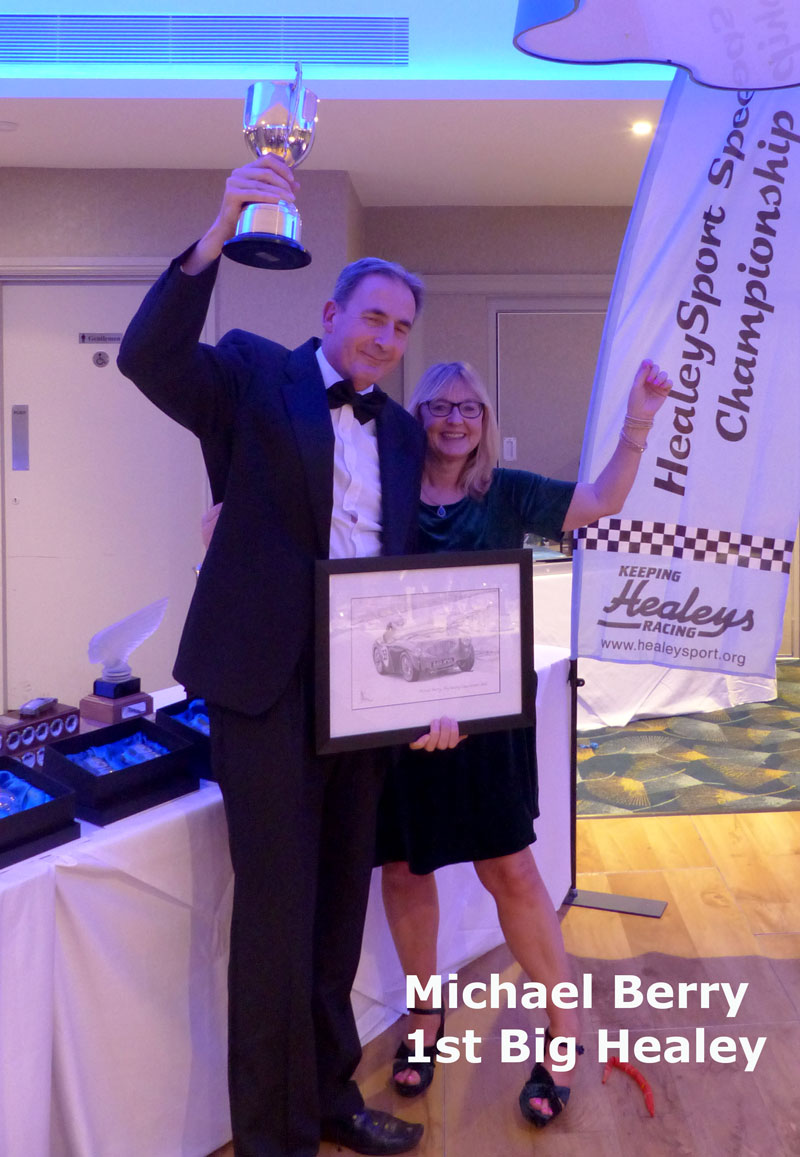 Our annual Awards Dinner took place at the Holt hotel near Bicester on Saturday 12th November. A celebration of this year's achievements of Healeys on track, deeds done and even problems encountered combined with a dinner, a raffle and some fun on the dance floor.

This was our first year at the Holt hotel after the drivers felt that we needed a venue that was more country house hotel and suited the number of guests attending the event.  The staff at the Holt put on a great evening with a welcome drink, an excellent meal with friendly but impeccable service.

Steve Casson was our Master of Ceremonies for the evening and he had a lot to get through.  He started by welcoming all our guests, including Bill and Rose Rawles (from Bill Rawles Classic Cars) who sponsor our Big Healey and Jensen Healey classes.

The awards part of the evening was kicked off by Paul Baker, then Richard Mason supported by Rose Rawles presented the awards to the Sprite and Jensen Healey classes.

Paul then presented the awards for the Big Healey class ably assisted by Rose followed by the points based awards and then the discretionary awards.  A special award was given to a non-driver and the awards part of the evening was completed by presenting our 2022 Overall Champion award to Steve Casson - a much deserved winner. 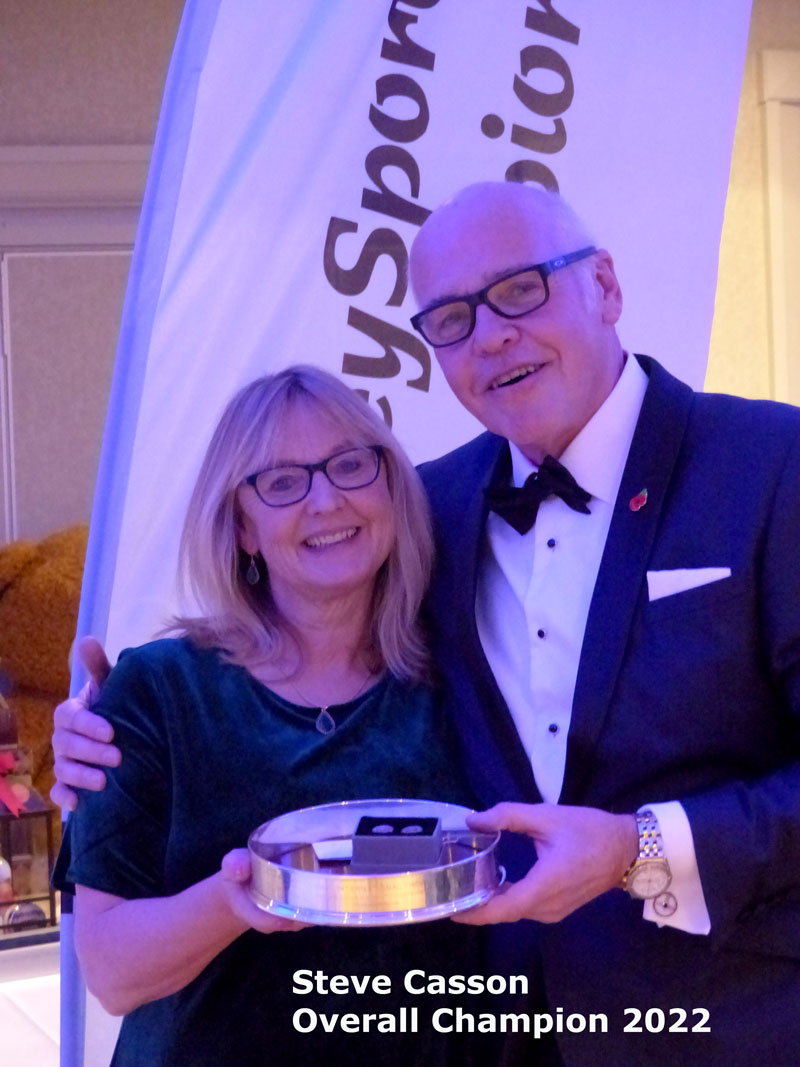 presented with a superb framed pencil drawing of their car in action (if they have not received one before) for them to admire in the years to come.

Jackie Baker, our club photographer, was presented with a huge box of chocolates to show the thanks and appreciation of all the drivers for all her efforts in recording what they get up to on track over the last year.

A big thank you to our Sponsors - Bill Rawles Classic Cars who sponsor our Big Healey and Jensen Healey classes, Peter May Engineering for sponsoring our Sprite and Libre classes and Cape International who sponsor our Overall Champion award.

Steve Casson then ran the raffle with his usual amusing selection of festive and unusual prizes.  As always, the most keenly sought was a huge cuddly teddy bear which was won by David Lane, who was not overly impressed and kindly donated it to Richard Salisbury's daughters, who certainly were.

After the final photo's were taken, Andy B, our DJ, fired up and the dance floor filled fast and stayed that way all evening.

Overall, the feedback from everyone was that the evening was a great success - more a party than a formal event.  They all had a great time, finished off by breakfast together the next morning in a private dining facility before everyone headed home for a much needed rest.  Huge thanks was given to Andy B and the team at the Holt Hotel for organising such a successful event. 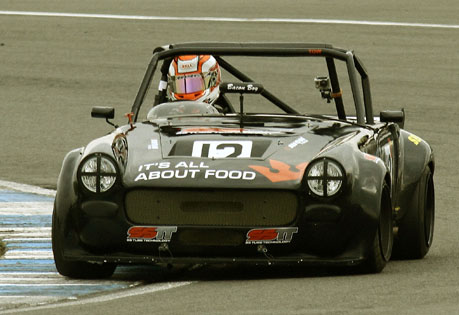 Healeysport offers Jensen Healey drivers the chance to take part in the Healeysport Speed Championship and compete against Big Healeys and Sprites. The regulations have been agreed with Motorsports UK to allow for any Jensen Healey - Roadster or GT - that is a standard road car or modified car to take part. With its modern, Lotus designed, 2 or 2.2 litre, 16 valve, twin cam engine contained in a lightweight body these reasonably priced, pre 1976 cars will be competitive in road legal form, so with some modification they will be very competitive indeed.

Points for Charity - For 2023, all drivers taking part in the Sprint and Hill Climb championship have the option to give donate (£1 a point) to a chosen charity based on the number of championship points they accrue by the end of the season. The Overall Champion at the end of the previous season chooses the charity for the year ahead. The scheme is entirely voluntary as the drivers need to tick the "Points for Charity" box on their championship entry form to agree to opt into the scheme.  In 2022 we raised nearly £1000 for Headway Surrey and hope we can do better next year.

Steve Casson is our 2022 Overall Champion and he has chosen Headway Surrey to be our charity for 2023.  Headway Surrey is a charity that supports people and families where a head or brain injury requires some rehabilitation.  Their biggest client group are those recovering from road traffic accidents.

If you are interested in circuit racing your Austin Healey Sprite or MG Midget then contact Mike Parker the organiser of this championship - see contact detail below.

The series sponsor continues to be Robin Lackford of Lackford Engineering who also takes part in the championship in his red Austin Healey Frogeye Sprite sporting no.57. 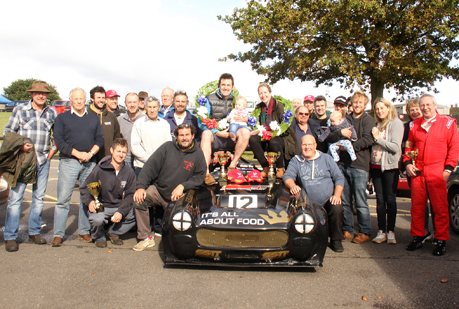 This championship is open to MG Midgets and Austin Healey Sprites and there are three classes to choose from Fully modified, Race modified and Road Modified plus an Invitation class at the discretion of the Championship Coordinator.